S4A, or Scratch for Arduino, is an app that you can use to program Arduino boards using Scratch. You can program robots and LED’s without writing any code: all you need to do is drag and drop instructions in the visual programming environment. 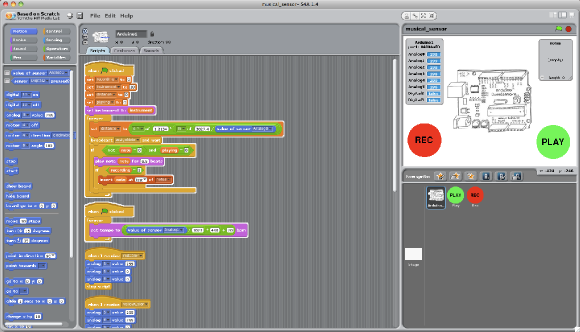 The first step is to install Arduino and S4A from the Snap Store.

After that, you need to give the user account on your computer access to USB devices. Only administrators and user in the dialout group have access to Arduino board connected over USB. Because of that, you will get a “Permission Denied” error when you try to upload a program. In order to give your user access, run the following command and restart your computer.

After this, you need to restart your computer.

The next step is to Flash the S4A firmware on your Arduino board. This is required so that S4A can connect to your board to run your apps on it. You need to install this firmware using the Arduino IDE.

After the upload succeeds, you can open the S4A program and start programming your board!

When I upload code to the Arduino, I get a “permission denied” error

When you get the following error, that means that the Arduino IDE is not allowed access to the Arduino board.

This means that either the IDE or your current user is not allowed access to the Arduino USB device. Make sure you execute the following commands as the user which runs the IDE.

After this, restart your computer and try again.

Note: if the user which runs the IDE does not have sudo permissions, you can grant the user permissions from another account by running sudo usermod -a -G dialout <username> and replacing <username> to the name of the user running the Arduino IDE.

comments powered by Disqus
A fundamental difference between Snap and Flatpak What's up with CRI-O, Kata Containers and Podman?